Not even a genuinely competitive football competition, the Bundesliga is dead.

The last decade has produced the most absurd dominance ever witnessed in a major European league, even Bayern Munich have triumphed 10 times in a row. Only once has the title been clinched on the final day of the season. More regularly, it’s wrapped up before Easter.

Bayern are likely to make it 11 straight league titles this year, equaling the feat of Dinamo Zagreb in Croatia from 2006-16. They might have Norwegian side Rosenborg’s 13 in their sights, too. After that, we’re into the realms of Latvia, Gibraltar and Vanuatu to find similar cases.

And while Bayern have long been established as Germany’s major club — they have 31 league titles overall, with no other club boasting more than five — until the last 10 years, they had never triumphed more than three times in a row. Their complete dominance is a modern concept and a sad reflection of the lack of competitiveness across modern European football. Elsewhere, Italy and France’s top divisions have also been dominated by one club, while the gap between rich and small in England and Spain remains a major issue.

But a decade of titles is an appalling situation and represents the sad decline of a league that, prior to the last decade, rightly had a reputation for being exciting and competitive.

Possible solutions tend to be wide-ranging. Bayern were not involved in the talks about a European Super League, but they are the type of club such a league would suit — they are simply too good for their domestic rivals. There have been tentative talks about introducing a play-off system in the Bundesliga to provide some much-needed end-of-season excitement. Financial reforms must also be considered.

But maybe the solution is actually much simpler. Forget about creating new leagues or getting financial rules through the courts.

The simplest way to make the Bundesliga competitive again is for everyone — Bayern included — to agree they’re simply too good for the league, and allow their opponent a one-goal head start each game.

Would it work? Well, here’s the last decade would have played out.

Even with this controversial new system, this would still have been the greatest campaign in Bayern’s history. They would still have topped the Bundesliga table after all 34 matchdays, even after their two meetings with Dortmund were converted into 2-1 wins for Jurgen Klopp’s side. Bayern would have won the league by six points.

Bayern would have been 17 points worse off with this one-goal deduction — but Dortmund’s results are merely converted into a couple of 3-1 defeats, therefore Pep Guardiola would have lifted the title in his first Bundesliga campaign.

Klopp’s Dortmund fell away dramatically this season and a Kevin De Bruyne-inspired Wolfsburg would have taken the title by three points ahead of Borussia Monchengladbach. The two title contenders would have started the final day just one point apart.

Guardiola’s final season would have been a disappointment, with Thomas Tuchel triumphing in his first Dortmund season with ease. After two seasons of disappointment, Guardiola left for Manchester City.

Bayern found life post-Pep difficult, slumping to fourth under Carlo Ancelotti. There was a new name on the trophy for the first time since Wolfsburg in 2009, as Ralph Hasenhuttl’s RB Leipzig stormed to the title in their first-ever Bundesliga campaign, prompting comparisons with the Kaiserslautern side of 1997-98.

Bayern recovered from a dreadful opening to the campaign under Ancelotti, losing three of their first seven, to storm back under Jupp Heynckes and deny Schalke what would have been their first title since 1991.

Bayern could only manage third under Niko Kovac, with Dortmund triumphing once again, this time under Lucien Favre.

The Bundesliga was the first league to get going after COVID-19, and with the world watching German football, we were treated to a remarkable climax to the league, with Leipzig pipping Dortmund by a single point to give Ralf Rangnick the first title of his career. Hansi Flick’s Bayern — with no similar system in European competition — lifted the European Cup.

Julian Nagelsmann had taken over from Rangnick — but it was the same result, with Leipzig retaining the title ahead of Dortmund. Bayern were only on the fringes of the title race.

For the first time since 1994-95 under Giovanni Trapattoni, Bayern failed to finish in the top four. Dortmund triumphed again, with yet another near-miss for Leverkusen, the side who never quite managed to win the Bundesliga — this was the sixth time in their history they’d finished runners-up.

So, in total, Bayern still won three league titles in the last 10 years. Both Dortmund and Leipzig also won it three times, with Wolfsburg the fourth winner. For comparison, in the other major European leagues, only the Premier League can offer four different winners in the last decade.

Bayern’s penalty points, compared to real-life results, ranged between 12 and 23 each season.

The side that benefited most from Bayern’s penalty points was — perhaps surprisingly — Hertha Berlin, who escaped relegation in the play-off last season. They would have recorded three extra victories over Bayern and another seven draws, gaining a total of 13 extra points. Leverkusen, Leipzig and Freiburg would have won 12 extra points, with Dortmund and Monchengladbach picking up 11 extra points.

Obviously, the limitation here is these results don’t really tell us precisely what would have happened if Bayern’s opponents had been given a one-goal head start. In real life, in matches where Bayern were one goal ahead going into the closing stages, they played cautiously to secure the win. If they knew that result would only count for a draw, they would push harder for a late winner. But this surely means Bayern would do better than suggested by these numbers and therefore the penalty points each season wouldn’t be as severe. 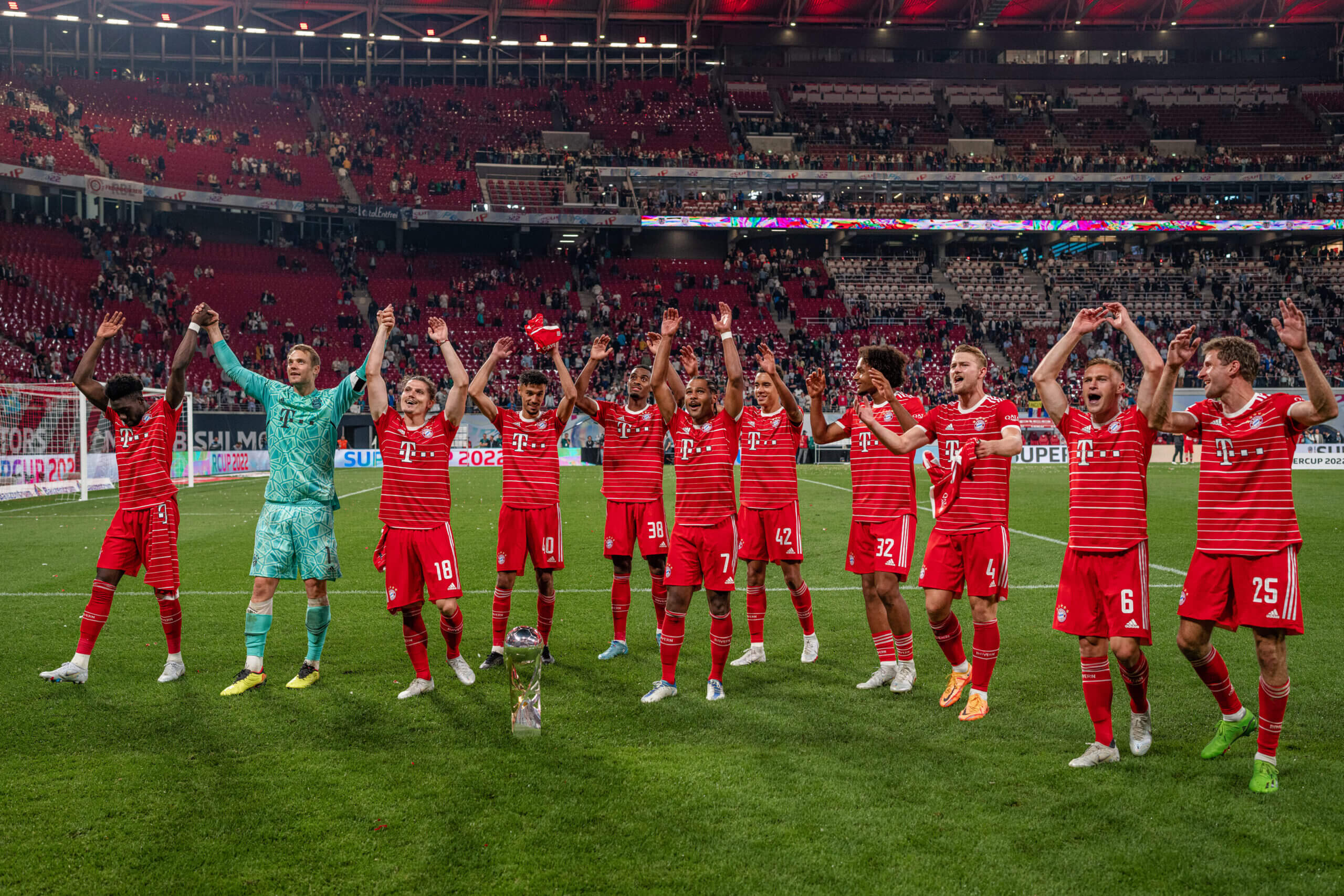 Bayern Munich have triumphed 10 times in a row in the Bundesliga (Photo: S. Mellar/FC Bayern via Getty Images)

The different game-state from kick-off, of course, means the strategic approaches would be different, too — Bayern would probably dominate possession even more than they do already, with opponents content to play on the break.

Perhaps this exercise serves as further evidence of how strong Bayern’s dominance is. Here, we’ve given their opponents no fewer than 340 extra goals, spread evenly throughout a decade, and Bayern are still the joint-most successful side in the Bundesliga during that period with three league titles.

It is, of course, a light-hearted solution. But it’s a serious problem, and therefore, why not? How many times will Bayern have to win the Bundesliga for everyone to accept that a drastic change is required? Will Bayern supporters actually enjoy their side winning the league as a matter of course, or would they have more fun with an actual challenge? Bayern would still have a chance to win the Bundesliga. They would still be able to contest cup competitions as usual. Every goal, and every win, would be more meaningful.