Celtic passed up early chances as they marked their Champions League return with a 3-0 defeat to Real Madrid in front of a sell-out crowd.

Captain Callum McGregor watched his shot crash off the post with Liel Ababa and Reo Hatate denied by Real goalkeeper Thibaut Courtois as the hosts impressed in the first half.

Even Ange Postecoglou’s side tired in the second half, the champions of Europe showed their class as Vinicius Jr and Luka Modric scored in quick succession to go 2-0 up.

Eden Hazard scored a third to wrap up the victory for Carlo Ancelotti’s team and hand Celtic defeat in their first Champions League group match for five years.

Real. who lost Karim Benzema to injury in the first half, join Shakhtar Donetsk at the top of Group F after they defeated RB Leipzig.

Celtic travel to Warsaw to face the Ukrainian side next Wednesday in their second group game.

A banner in the Celtic standing area declared they were ‘back with a bang’ and the hosts had a great opportunity to take the lead within 30 seconds of their first Champions League group game in five years. The ball fell for Abada inside the box but Courtois pushed the Israel international’s shot wide at full stretch.

Vinicius was breaking well down the left for Real and Cameron Carter-Vickers blocked Modric’s shot but Celtic continued to press and Abada soon spurned an even better opportunity.

Jota’s first-time pass sent his fellow winger clear after Celtic took a quick free-kick on the edge of their box, but Abada shot straight at the goalkeeper.

The Scottish champions kept up the pressure. Courtois parried Reo Hatate’s powerful volley before McGregor’s first-time strike shook the frame of the goal but bounced to safety off the inside of the post.

Federico Valverde fired one close from 20 yards at the other end just before injury forced off Benzema, who was replaced by Hazard.

Man of the match: Luka Modric

Real dominated possession in the latter stages of the half and Hazard stabbed wide from six yards after getting on the end of a Modric cross.

The Belgian soon sent Vinicius clear despite major suspicions of offside but Joe Hart did well to block.

Maeda replaced Abada at the break but missed the best chance yet within two minutes when he scuffed an effort straight at Courtois from six yards following Josip Juranovic’s cross.

Celtic paid the price for the misses in the 56th minute. Valverde made space down the right wing and spotted Vinicius cutting in from the left. Juranovic could not make up the ground to cut out the low cross and the 22-year-old slotted into the corner.

The double whammy was complete after Hazard broke clear following Carter-Vickers’ challenge to leave Celtic outnumbered. He fed Modric, who cut inside and stroked the ball into the corner of the net with the outside of his boot.

Real had taken the sting out of the game and Kyogo Furuhashi’s introduction in the 72nd minute lifted the home crowd.

Hazard soon silenced them, briefly at any rate, when he scored from six yards after Dani Carvajal had cut the ball back following a deep cross.

Furuhashi, Jota and substitute Sead Haksabanovic went close to rewarding the Celtic support’s incessant backing with a goal but their appreciation of their team at full-time was further evidence they still believe they can make their mark on the tournament.

What the managers said 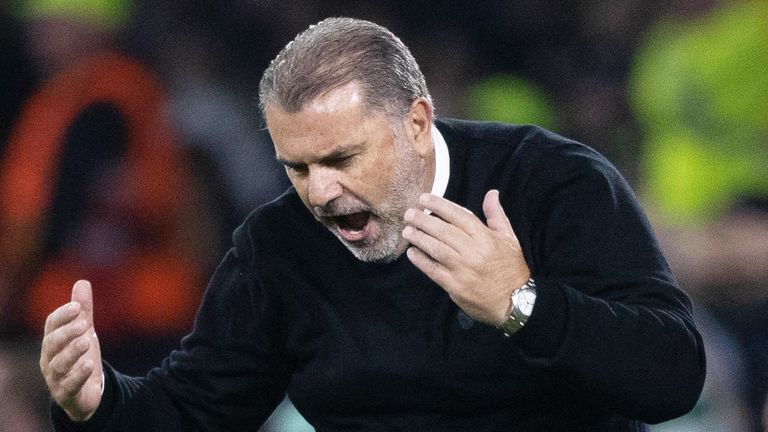 Celtic boss Ange Postecoglou was frustrated by the chances they passed up:

“Obviously disappointed with the outcome. I thought the first goal was always going to be important and up until that point we were well in the game. If anything, we had the better chances and you need to capitalize on them and we didn’t .

“Once the first goal went in they’ve got that quality to take control of the game, they pressed on and were able to exploit the spaces we left.

“Up until the 60th-minute mark when they scored we were well in the game, but you learn at this level that if you don’t take your chances you’ll be punished.”

“It was like two games, first half we suffered a bit with intensity, second half we had control.

“We were not surprised [with Celtic’s start]. We knew they could start really fast. We were lucky because they hit the post.

“Second half, was much better. When we opened to score it was easier for us to control the ball.”

Celtic are back in Scottish Premiership action next as they host Livingston on Saturday in a 3pm kick-off.

Real Madrid continue their La Liga title defense with a home game against Real Mallorca on Sunday at 1pm.