Less than six months after being favored by some in the Manchester United hierarchy as their club’s next permanent manager, Julen Lopetegui is on the brink of being fired by Sevilla.

Saturday’s 3-0 defeat at home to Barcelona means Sevilla have just one point from their first four La Liga games, equaling their worst-ever start to a season.

After a sorry end to the 2021-22 campaign and a frustrating summer transfer window, the mood around the Estadio Sanchez Pizjuan is very restless. Club president Pepe Castro’s situation is not completely secure, long-serving sporting director Monchi has been receiving rare criticism, but Lopetegui is by far the most likely to pay immediately if things do not quickly improve.

Defensive and structural issues in the team have been evident, which is far from ideal preparation for welcoming Manchester City and Erling Haaland for tonight’s Champions League group G opener.

A Sevilla win seems very unlikely, but something unexpected is required for Lopetegui to last much longer in his job.

The situation was very different back in January.

With Barcelona imploding and reigning champions Atletico Madrid stuttering, Sevilla were the only team pushing Real Madrid in the title race — prompting The Athletic to visit for a report on whether a title challenge was really possible.

Then came a controversial Copa del Rey elimination by city rivals Real Betis, followed by a run of 11 draws in their last 18 La Liga games, which left Lopetegui’s side just about hanging on to finish fourth and secure a return to the Champions League. They also slumped out of the Europa League — Sevilla’s own competition — to West Ham United.

Rojiblanco fans grumbled and whistled through yet more dull draws at home to relegation battlers Cadiz and Mallorca. When the season finally ended, all the talk was about the need for a revolution. Lopetegui would keep his job — having secured Champions League football it would be very difficult and expensive to fire him. Instead, the squad would get a complete overhaul.

Most obviously, center-back partnership Diego Carlos and Jules Kounde were both definitely leaving and needed replacing. Brazilian Marcao was identified and signed from Galatasaray, but he arrived injured and has still not even been able to train properly with his new team. Contact was made with Bayern Munich for the talented but inexperienced Tanguy Nianzou. However, the 20-year-old did not arrive until very late in the window.

In midfield, the situation was different — Sevilla wanted to move players out but could not. Since Ever Banega left after guiding the team to the 2020 Europa League trophy, all of Ivan Rakitic, Papu Gomez, Suso, Oliver Torres, Erik Lamela, Thomas Delaney and Jesus Corona have failed to make the required impact and now have very little resale value . The Athletic understands Sevilla were open to offers for most if not all of these players, but none arrived.

This made it all the more puzzling when the one high-profile player Sevilla did add was yet another mid-career playmaker in Isco, on a free transfer from Real Madrid. Now 30, Isco had spent most of the past four seasons on the bench at the Estadio Santiago Bernabeu, but his former Madrid and Spain national team coach Lopetegui really wanted him, and Monchi eventually resigned. 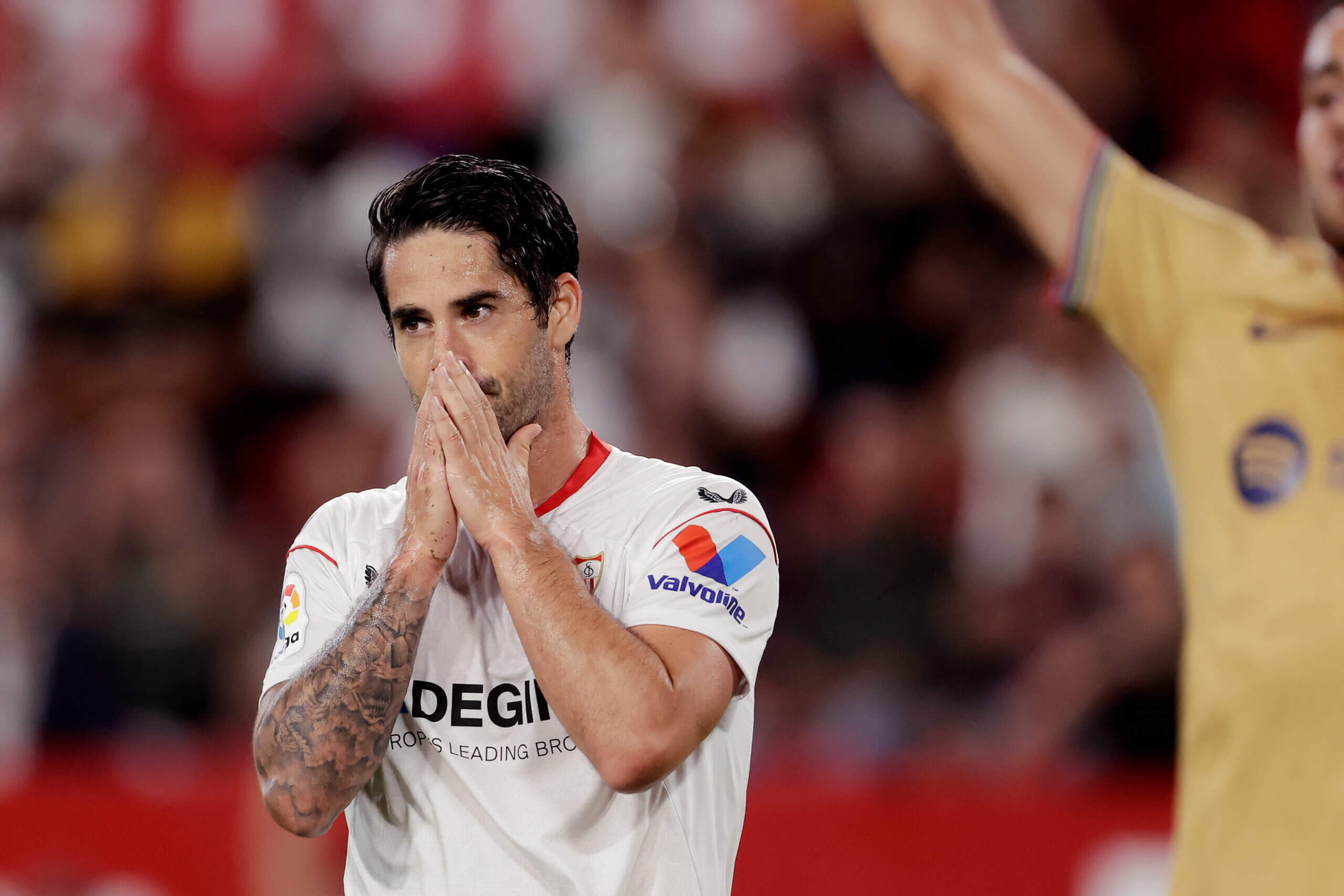 Through the summer, Monchi was keeping busy, upgrading around the edges of the squad. Loaning left-back Ludwig Augustinsson to Aston Villa and replacing him with Alex Telles on loan from Manchester United was good business. Little-used squad players Munir El Haddadi and Oscar Rodriguez were moved on to Getafe and Celta Vigo, while Belgium winger Adnan Januzaj arrived on a free transfer after leaving Real Sociedad when his contract ended last June.

The problem was there was not much money to spend. €31 million received from Villa for Diego Carlos was €20 million less than what Sevilla thought Newcastle might have paid back in January and went immediately into balancing the club’s 2021-22 accounts. Kounde’s exit to Barcelona could eventually bring in €60 million, but not all of that could be spent straight away.

One Sevilla player with a market was Argentina winger Lucas Ocampos, who had initially excelled on arrival in 2019 but over time lost his spark and his automatic place in the XI. Ajax wanted the 28-year-old to replace Manchester United-bound Antony and at first agreed to pay €20 million, but instead a loan deal was eventually agreed. This freed up some salary space but did not bring more money to spend.

Dolberg, Januzaj and Isco are the types of rescue jobs which Sevilla have specialized in during Monchi’s two decades running their transfers. Nianzou may well follow Kounde’s path and develop into a top defender who can be sold at a big profit.

But most at Sevilla are now looking much more short-term.

Any optimism that the new season could bring a fresh start has drained away over the opening weeks. Sevilla have been just as blunt in attack but have now become remarkably shambolic at the back.

Lopetegui was angry about the decisive penalty in a 2-1 defeat at Osasuna on the opening day, but the team performance deserved a little more. They were worse at the Sanchez Pizjuan in game two, needing an unfortunate error by Valladolid ‘keeper Sergio Asenjo to rescue a point against the newly promoted side.

Week three at another new team, Almeria, was another barometer of their current situation. Midfielder Oliver Torres headed Sevilla in front early and former Tottenham attacker Lamela had two excellent chances to score. But Almeria were making chances, too, and ex-Manchester United youth-teamer Largie Ramazini and giant center-forward Sadiq punished some dreadful defending to turn the game around, with only multiple saves by Sevilla goalkeeper Bono preventing a bigger defeat.

A reaction was required last Saturday at home to Barcelona. Lopetegui’s side started on the front foot, with Isco influential in his first start. But Rakitic, Isco and Lamela all missed chances and Barcelona struck on the break to go 1-0 up through Raphinha’s first Blaugrana goal. Confidence drained out of the team and the stadium. Robert Lewandowski was then left unmarked to sweep in the second goal. Soon after half-time, a complete systems breakdown at a corner allowed Barca defender Eric Garcia to score. That was that.

Making it even harder for the Sanchez Pizjuan crowd to take, their former hero Kounde had provided two assists for Barca. There were angry whistles and jeers on the final whistle, which Rakitic was asked about on TV soon afterwards. “We understand the anger and worry,” the midfielder replied. “We have to fix many things… we apologize for the result but ask for patience and understanding, we will get there. It is a tough situation, but we are working very well and we will get back to our best.”

At their best, Lopetegui’s Sevilla were an efficient and solid machine, capable of controlling the pace and direction of games, even against more talented and higher profile opponents. They were not the most exciting team to watch, but effective at winning games and picking up points. That super-efficient machine has become dysfunctional in both attack and defense. Lack of confidence and belief means the pieces don’t fit together, the players don’t trust each other, and it doesn’t look like they trust the coach completely either. The impression is of every man for himself and fingers being pointed.

“We had a glass jaw,” said Lopetegui after the Almeria game, with maybe too much honesty. After that game, Monchi ordered players who had quickly disappeared following the defeat back out onto the pitch to salute the traveling fans. Monchi himself spoke directly to fans who had just chanted for Lopetegui’s sacking. “To get out of this, we all have to be together,” he said.

The current sense is of a club with distances between everyone — directors, players and coach. There are also institutional factors to take into account — president Castro’s position is not fully secure, with rival factions on the board vying for control. It also does not help that local rivals Real Betis are flying under Manuel Pellegrini, reigning Copa del Rey holders and have nine points from their first four La Liga games.

The most vulnerable person in such situations is always the coach. Lopetegui takes at least some responsibility for the make-up of the squad, having asked for players like Suso, Corona and Isco.

The team’s dogged play, even when they were winning games, is also not in his favor.

Sparking a lively reaction when things are going against his team, through creative but risky tactical decisions, does not come naturally to the Basque. Ex-Valencia, Villarreal and Athletic Bilbao coach Marcelino looks the most obvious available candidate to fill a vacancy on the Sanchez Pizjuan bench, although his previous spell in charge a decade ago did not go well.

Former Tottenham and Paris Saint-Germain coach Mauricio Pochettino was on the cover of local paper Estadio Deportivo on Monday morning, but sources close to both Pochettino and Sevilla denied any direct contact at this moment.

The most intriguing would be for wavering Leicester manager Brendan Rodgers to get a chance to showcase his Spanish language skills, some of which were developed during a trip to study Sevilla’s youth system over two decades ago. Although that appears unlikely.

Some kind of change will be needed, however, should Sevilla’s performances and results not swing around sharply. Their upcoming La Liga fixtures look tricky, with trips to Espanyol and Villarreal before the next international break. The Champions League draw has also not been kind, with Manchester City at the Sanchez Pizjuan first up.

Sevilla fans will remember how two seasons ago, when he was at Borussia Dortmund, Erling Haaland destroyed a defense which still had Diego Carlos and Kounde in it.

“It’s a moment to believe,” said Lopetegui after Saturday’s defeat.

The problem for the team, and their coach, is that not many around the Sanchez Pizjuan share that feeling at the moment.