Danny Rohl is assistant manager of Germany’s national team, having previously had the same job at RB Leipzig, Southampton and Bayern Munich.

The game played out as expected.

Liverpool’s incessant, percussive style is unique for a top team. They do not keep the ball long in safe areas, they look to play forward, quick and straight. There’s relentlessness to the way they stick to their plan.

Real Madrid are less defined by tactical details and collective movement. They do not need three or four different formations, they keep it relatively simple. Calmness and confidence fuel their game.

So, could Liverpool create pressure without being exposed defensively on the break, something that is not easy against Madrid? Let’s break it down…

Defensive behavior after losing the ball

Liverpool often attempted to counter-press – even inside the opening minute, you could see how many players sprinted to win the ball back after losing possession and pushed their line higher up to cramp the field for Madrid. 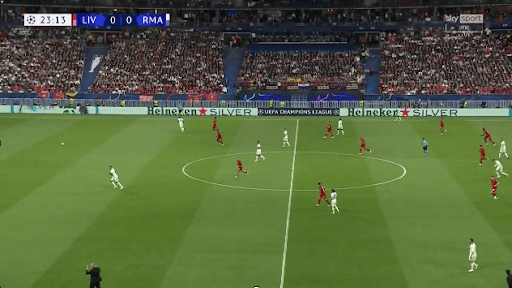 In the grab above, you can see how Liverpool’s line is actively moving higher up the field. That regularly gave them the chance to win the ball back inside the opponents’ half.

Madrid, on the other hand, quickly fell back into their formation whenever they lost the ball, with the aim of closing down the center of their own half, finding compactness in the deployment of numbers. That deeper positioning allows them to be a bit more measured out of possession.

Luka Modric acted as a half-striker when Madrid did not have possession, but they do not hunt down the ball, they focus more on negating space and waiting for the other team to play stray passes. In their own half, Madrid’s strength was in numbers not in pressure on the ball. 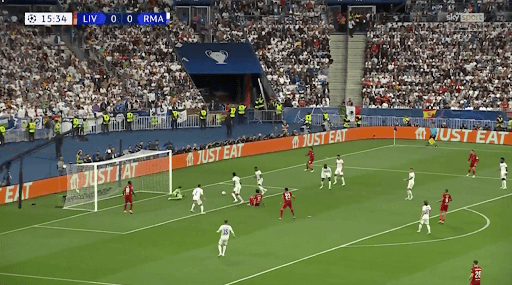 This is what sets Madrid apart. Both early and late in the game they had numbers in their box, making it difficult for Liverpool to find a way through.

How did Liverpool deal with Vinicius Junior? 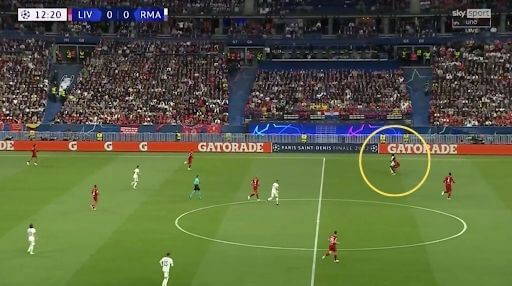 Here, you can see Trent Alexander-Arnold was much higher up the field at the far left edge of the screengrab and Ibrahima Konate (circled) is in position to close Vinicius Junior down.

Konate had far more duels with Vinicius than Alexander-Arnold did, and there’s a chance the Frenchman’s speed, covering of that defensive area and build-up play might have been the reason why he started ahead of Joel Matip. Throughout the night, Konate did a pretty good job and was a key part of how Liverpool closed Vinicius down. 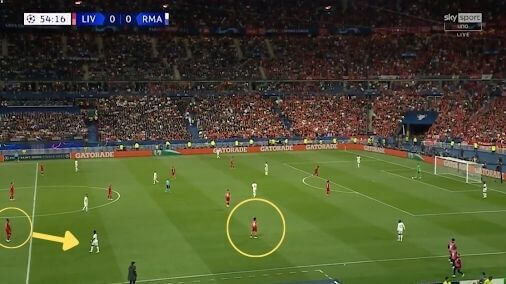 The same is on show again here.

Alexander-Arnold is higher up, in the Madrid half, with Konate further back, in Liverpool territory and in place to cover Vinicius.

It was noticeable that Madrid opted not to play wide balls directly to Karim Benzema but rather to hit wide areas and Vinicius specifically. Benzema tended to move away from leading the line and more into the No 10 position, so as to be involved in the play.

Did Carlo Ancelotti push his central defenders up at half-time?

In the first half, below, you can see how much space is on offer between the two lines.

Just before Mane’s chance that Thibaut Courtois diverted onto a post, the Madrid back four are sat really deep, they’re in their own penalty area, leaving the space between the defensive line and the holding midfielders wide open. 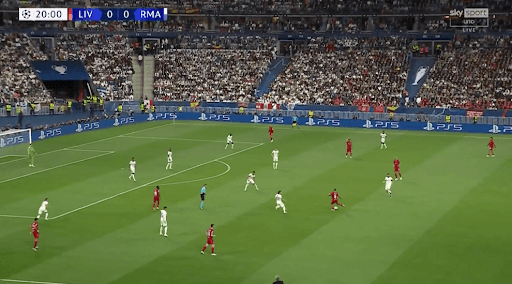 In the second half, below, a similar situation develops, and this time the central defenders are far more active. 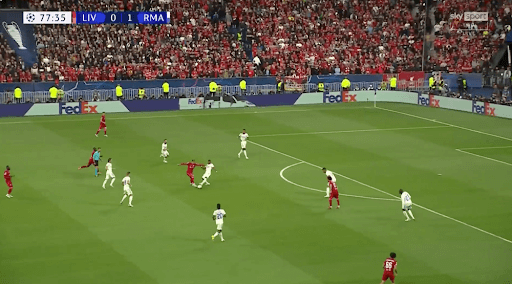 Liverpool had more chances to move into those spaces and control the game there in the first half.

In the build-up, Modric’s use of space is excellent and even in his rotating position he has an eye for the vertical pass which starts the move. 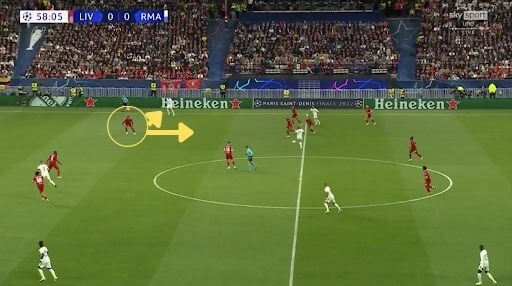 With left-back Andy Robertson out of position up the pitch, Virgil van Dijk has a chance to close down the winger or perhaps even intercept the pass the moment the ball is played out wide. The pass is a long one, over 10 meters, and he’s only four or five meters away from the opponent. He definitely has the time to attack the ball.

Had it been on the other wing, Konate would probably have closed down the winger. But Van Dijk prefers to stay in the center and so the attack continues. 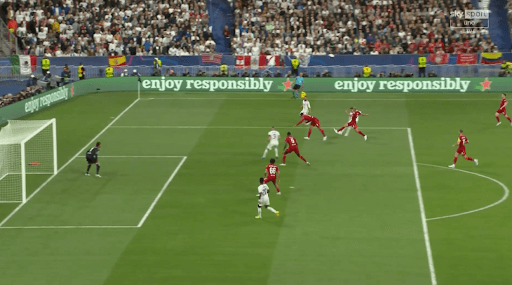 When the cross comes in, it’s difficult for Alexander-Arnold. Either he holds the line with Konate, which might have played Vinicius offside, or he secures the space.

His body position is wrong, though. He’s only looking at the ball. He has to be more open, so that his back is almost to goal and he has the chance to turn out. Instead, his back is to Vinicius. He does not even look behind him to see where the Brazilian is.

You heard a lot about Ancelotti being a coach that has succeeded through his team, but Madrid did have a plan yesterday.

In transition, Benzema acted like a target man and Madrid often looked to get in behind Alexander-Arnold, avoiding the play in the middle. Other than the goal, that did not count – Benzema did not have a shot on goal. But he delivered a real team performance. 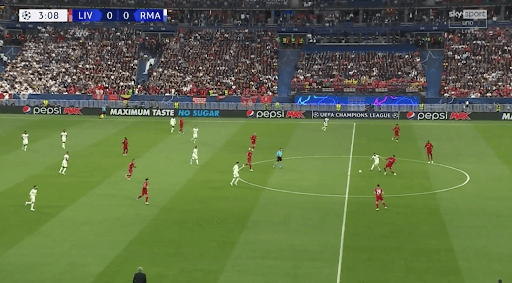 Here, Benzema comes short and then Madrid looked to find Vinicius out wide.

Benzema was often out wide as well, but in transition Madrid tried to entice Liverpool and draw Alexander-Arnold out of position.

If you look at Liverpool’s number of shots at goal and the fact that Courtois had to make nine saves, you know the chances were there. But you need one of them to go in. For a final, Liverpool created a lot of chances and Jurgen Klopp made attacking changes.

There was not one reason that Madrid won the game, and it’s worth pointing out their goalkeeper played an exceptional game and his saves decided the result.

In the analysis, there are not many scenes that Klopp can discuss. Liverpool had Madrid’s counter-threat under control through Konate and in attack, it is always difficult to score goals against such a deep-sitting block.

Against Villarreal in the semi-final second leg, they managed to find a way through with lots of crosses and gegenpressing, but even in that match one of the goals was also a bit of a goalkeeper error and that’s the slice of luck they didn ‘ t have in Paris.