“I know 4-0 is a surprise, but it shouldn’t be a surprise that we are capable of winning over Manchester United,” said Thomas Frank after Brentford’s victory on Saturday.

The Brentford manager was in a bullish mood following his team’s win, referring to the two defeats to United last season and how a positive team culture led to last weekend’s reversal. The 4-0 victory provided multiple blueprints of how to score against Erik ten Hag’s side and post-match comments from Frank explained how one Premier League team often learns from another.

When asked if Brentford looked to exploit the lack of height in United’s back line, Frank said: “We knew we’d more likely either win (the ball) or the second ball around it.

“Of course, we looked at what Brighton did well against them, and Brighton are also like us in the way they want to play.

“Normally Brighton always build from the goalkeeper, but they went long every single time so of course we looked at that. We knew we had that weapon, so that’s why we did it.”

Word is clearly spreading about how to get a result against United, with a number of managers explaining their methods in press conferences.

Here’s a look at how United became the talk of the town.

Even Scott Parker learned this weekend, it is dangerous to be complimented by Pep Guardiola. The City manager has a tendency to praise an opponent before and after he soundly defeats them.

When Manchester City defeated United 2-0 at Old Trafford in a very straightforward manner on November 2021, Guardiola said the following: “I ask (the players) in the half-time, more passes. We had to pass more the ball. So when you attack a little bit quicker, then you need to attack, they will attack you much, much quicker. In the transitions, they are much better.”

The United side that started the 2021-22 season boasted numerous attacking options that thrived playing counter-attacking football, but when City passed the ball more and kept possession, they denied United those transitions.

Manchester City are one of the best possession sides in Europe, and not everyone can copy them, but Guardiola’s comments carried weight – keep the ball from United to improve when attacking and defending against them.

Ralf Rangnick suffered his first defeat as United’s interim manager at the hands of Wolverhampton Wanderers in January 2022. The final scoreline “only” read 0-1, but Bruno Lage’s side dominated for the majority of proceedings at Old Trafford, and the Wolves manager offered a thoughtful explanation as to how such a result was possible.

🎙️ “The players understood the plan and we deserved the three points.”

Bruno Lage was impressed with the way his Wolves side performed to get the win against Man United. pic.twitter.com/h6gMqVHwns

“The way they press, we prepared to try and understand, when we have the ball we try to understand which men will be free,” he said following the game, outlining the less-than-effective manner in which Rangnick’s side put pressure against the ball, and how a team can pass around it.

“It can be whoever is free, one of the centre-backs free, or if they come and press three against three like they did with (Edinson) Cavani, the spaces will be outside. That’s why today we try to find (Nelson) Semedo and (Fernando) Marcal and they come inside to play and then we play against six men: the defensive line and the two midfielders.”

Borrowing from Guardiola’s designs, Wolves defeated United in January due to their confidence in possession and ability to gain numerical superiority in key areas. It was a victory that showed a team that didn’t need great resources to trouble United, just patience and proper planning.

“When we arrive there, it’s important to keep the ball, get the opponent running,” added Lage. “Top teams, sometimes they have more problems when they don’t have the ball. If you spend more time with the ball, we will find our space and create chances.” 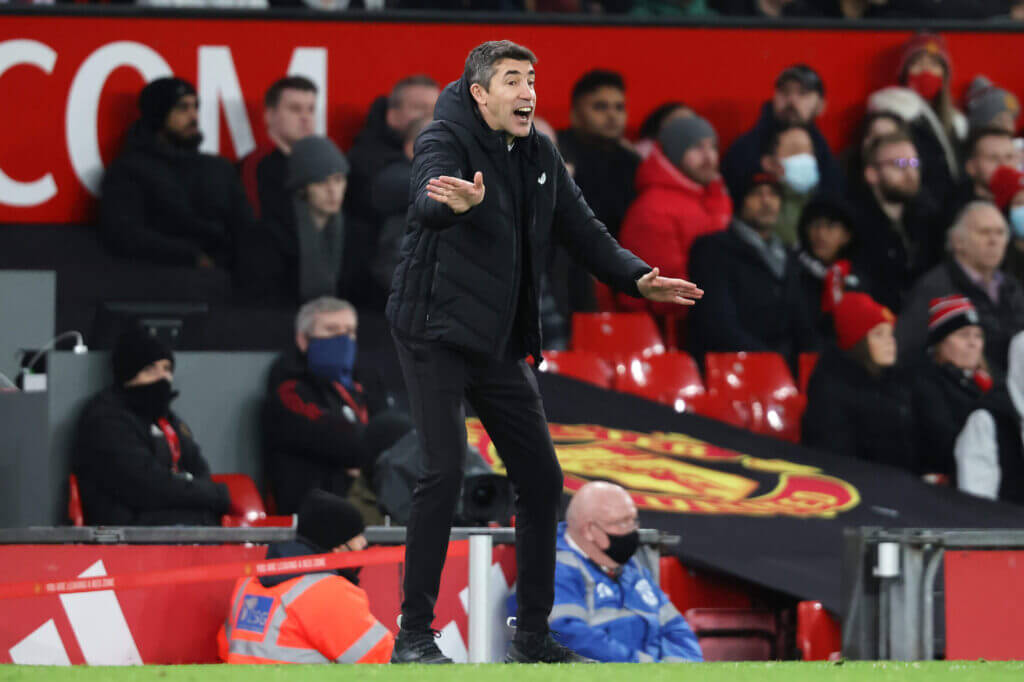 Ralph Hasenhuttl relished going up against his former boss Rangnick in February 2022. Southampton could only force a 1-1 result against United at Old Trafford, but the draw came as part of a troubling sequence for United, where they struggled to maintain focus for longer than an hour.

“Our team, with a lot of technical players, for them it is difficult to stay compact for a long period of time,” said United’s interim manager when asked if the issue lay in his half-time team talks. For Hasenhuttl, United’s issues were obvious.

“It’s not a big secret that when they lose the ball the reverse gears are not the best from everyone,” said the Southampton manager. At the time, Rangnick wished for his side to defend in a compact 4-4-2 shape, but opposition teams found it far too easy to play between United’s midfield and back four.

“The longer the game was going, the more you are chipping (against) them in the first line (of United’s defense) and then you can play over this first line and then you have space,” added Hasenhuttl.

This draw was also notable in that it saw Rangnick talk of a “psychological mental issue” that affected United players not long after they conceded. Previous kings of the comeback, United have not won a game after going a goal behind since a 3-2 victory over Arsenal under Michael Carrick in December 2021.

Brentford’s victory over United was alarming not just for its scoreline, or Frank’s comments about targeting United’s lack of height, but also for how each goal was scored:

It was also telling that the Brentford manager commented on a drop-off in performance levels once Brentford went 4-0 up, echoing a sentiment shared by Jurgen Klopp after Liverpool’s 5-0 victory over United last season. United are at such a low ebb that teams will not have to play at 100 percent intensity across 90 minutes in order to defeat them.

Sometimes the sensible option is to beat United early, then conserve your collective energy for future games. Such are United’s flaws when out of possession, an opposition team can have sustained periods of recycling possession across their defense and midfield, safe in the knowledge United cannot hurt them. 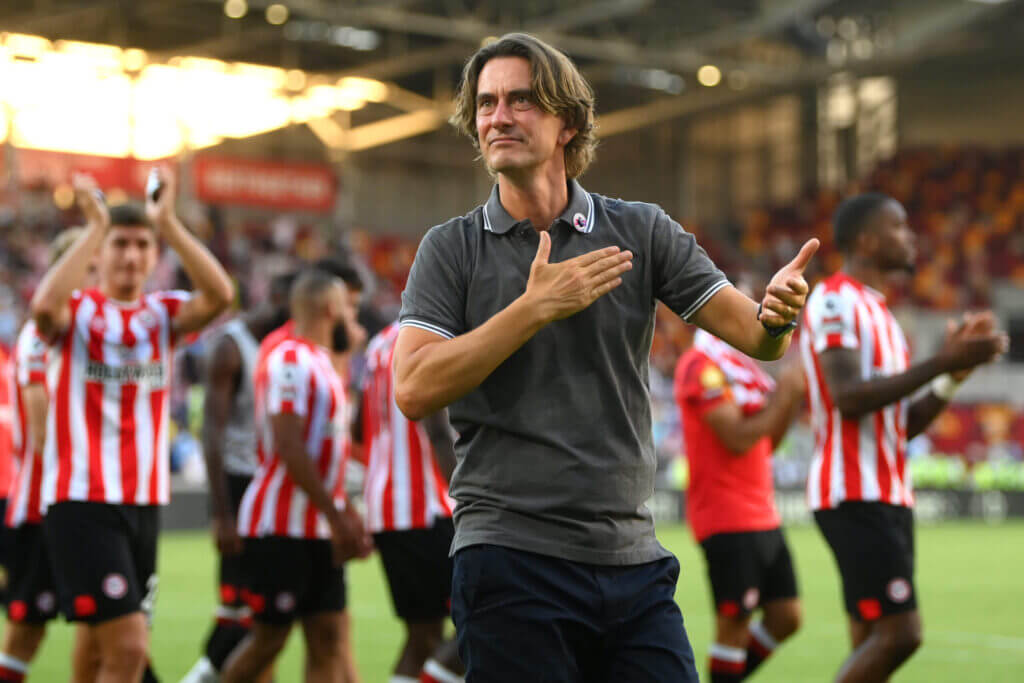 What does this all mean?

“We want to play a proactive style of football, on the ball and off the ball,” said Ten Hag shortly after his unveiling as United manager.

“Trying to do that has to be our intention. The coaches bring it over to the team that we are, in every situation, proactive. We are brave and willing to have the ball, to give each other options. But also off the ball, to get the pressing style is what we’re working for together.”

Two games into the Premier League season and there is a considerable gap between the proactive team Ten Hag wants and the reactive team he has.

What will be concerning for Ten Hag is how opposition managers cite the structural issues of his team, rather than problems that can be solved by swapping individuals out of his starting XI. All of these managers have alluded to the difference in confidence between their side and United. The longer you have the ball, the more demoralized United players become, leading to more spaces on the pitch that the opposition can exploit and score from.

It is a vicious circle that will take Ten Hag a lot of time on the training field and some sensible moves in the transfer market to start it address. United made a number of individual mistakes against Brentford on Saturday, but they are best read as symptoms of an executive-level dysfunction.

There was a time when defeating United would be a special event, requiring a dose of luck to go along with copious amounts of skill. Then there was a period where elite teams with better players could get a result. Now it seems a Premier League team needs little more than a coherent plan and decent effort to trouble United.

You can be unlucky with a refereeing decision and get a result against United. You can play hard for a little more than an hour and still take points from United. You can miss at least one obvious goalscoring opportunity and hurt United. You can take a speculative long-range effort “just to have a go” against United. Small flaws become glaring weaknesses when they are hit often enough, and United have many flaws that can be exploited by many teams.

The troubling thing for Ten Hag is there is more than a single blueprint for getting a result against Manchester United. There appear to be several and Premier League managers can pick and choose which ones they want to try.