Manchester United’s opening goal against Arsenal was a thing of beauty.

It wasn’t simply that the goal featured all 11 players, or the fact United cut through Arsenal’s lines smoothly. It was about how they created the situation — playing four backwards passes and going from level with the opposition penalty area right back to their goalkeeper. It was a perfect demonstration of the value of going backwards.

The interesting section of the move starts with the eventual goalscorer, Antony, up against two Arsenal players. The Manchester United winger performs a couple of stepovers, but the most important thing about this situation is the positioning of the Arsenal players. All 11 players are back inside their own third, with almost no gaps between the lines. It’s difficult to see how Manchester United could play through such a deep, compact block. 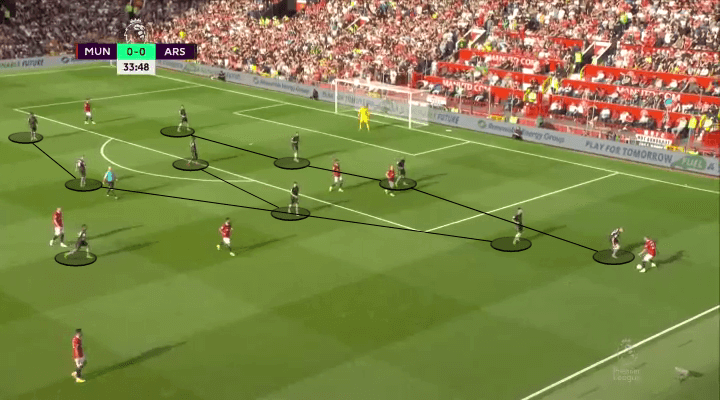 And therefore, Antony does the right thing. There’s little point in throwing a hopeful cross into the box here. He goes backwards to Diogo Dalot. 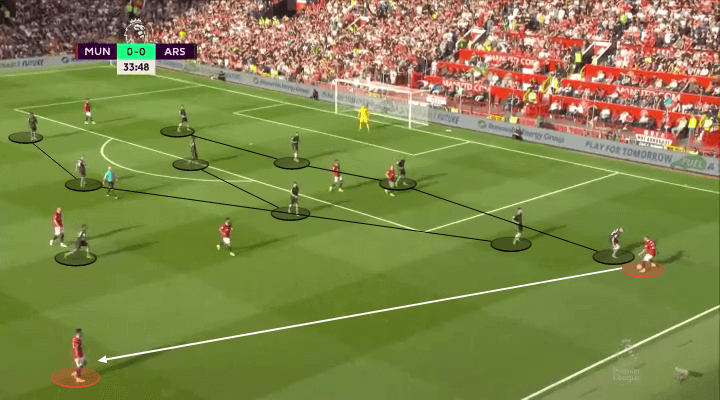 Dalot, in turn, goes slightly backwards to Raphael Varane, who then plays the ball to Lisandro Martinez. Both are sideways passes, really, but both are taking the ball closer towards Manchester United’s goal rather than the goal they’re attacking. 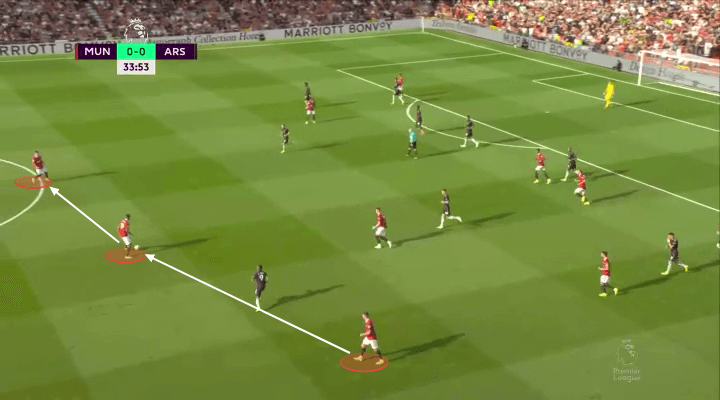 And then comes the most obvious backwards pass — Martinez, who has noticeably been keen to play forward whenever possible since joining United, goes all the way back to David de Gea.

And, at this point, the traveling Arsenal fans cheer sarcastically, slightly in response to Manchester United fans cheering Antony’s stepovers. Arsenal fans are making a point — look where that got you. 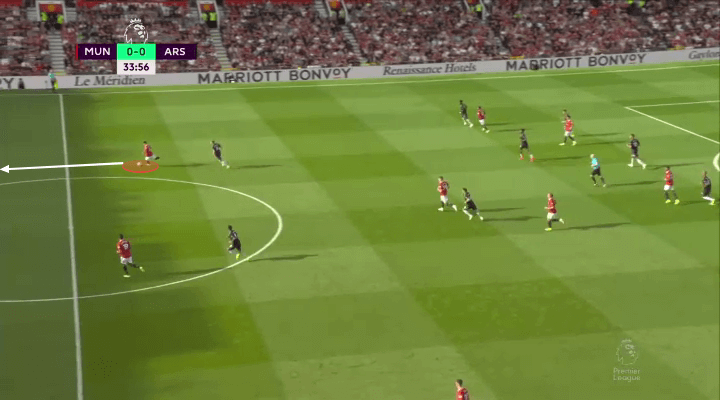 But Manchester United have, curiously, got Arsenal right where they want them. De Gea returns the ball to Martinez… 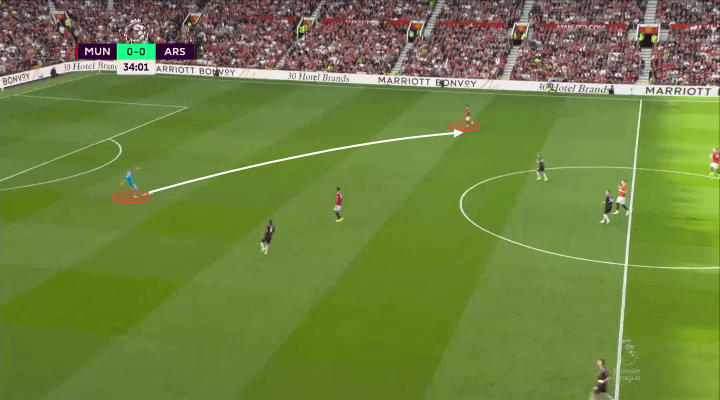 … and now, look at Arsenal’s shape. There’s nothing inherently wrong with it — it’s roughly as Mikel Arteta would want Arsenal to be in this situation.

But Jesus has shifted 60 yards up the pitch and there are now big gaps between the lines for Manchester United to play through. The ball goes out to Tyrell Malacia, then infield to Christian Eriksen. 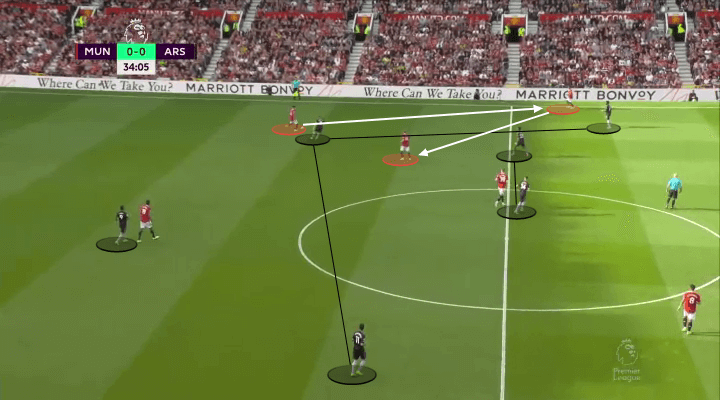 And, suddenly, Arsenal look badly stretched. Albert Sambi Lokonga has pushed up in an attempt to close down Eriksen. Granit Xhaka is infield watching Scott McTominay. Arsenal’s defense arguably hasn’t squeezed up tight enough, therefore Bruno Fernandes is free to receive Eriksen’s ball into his feet. It’s a good pass, certainly, but the real genius is what has come beforehand — going backwards to open up the space to play forward. 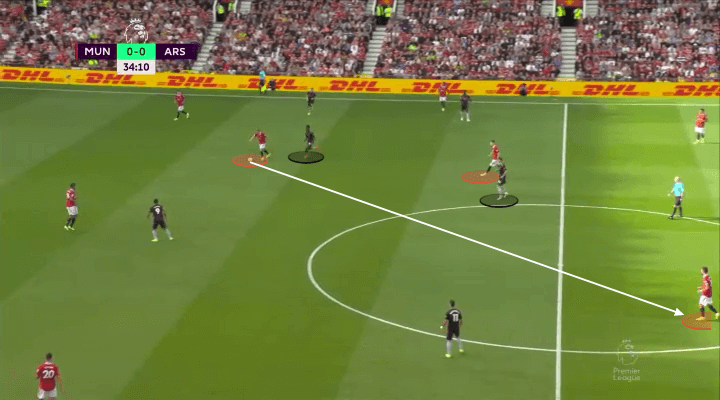 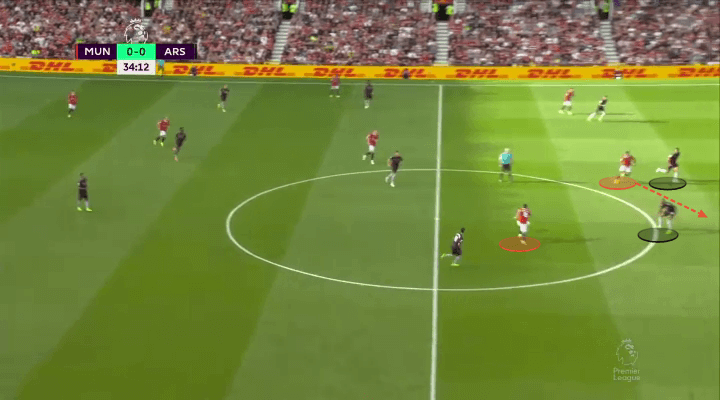 … but, responding to Rashford’s run, he shifts backwards three yards… 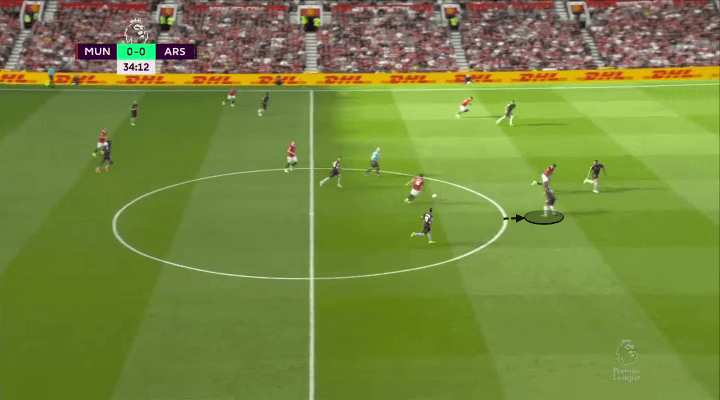 … and that means he’s not close enough to win the ball here. It’s a foul, but the referee plays advantage and the ball rolls onto Jadon Sancho. And now, this feels a very familiar situation for Erik ten Hag’s sides — they’re about to move the ball from one flank to another, having sucked the opposition to one side, just as they did for the opener against Liverpool. 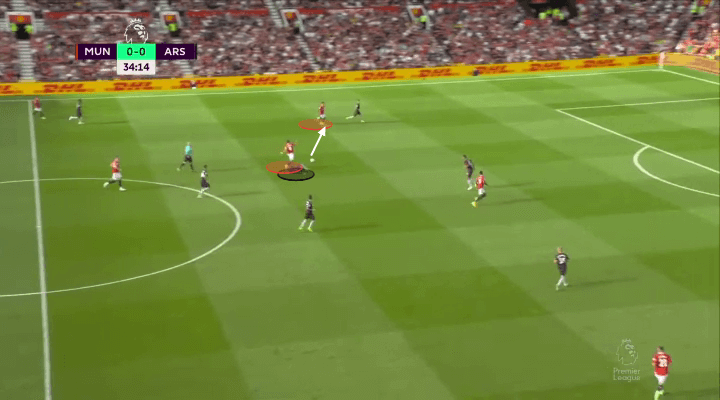 But first, it’s worth looking at the Arsenal defense. When Antony had the ball in the corner, they were perfectly organized. Now they’re desperately out of shape, with Gabriel out of the game. 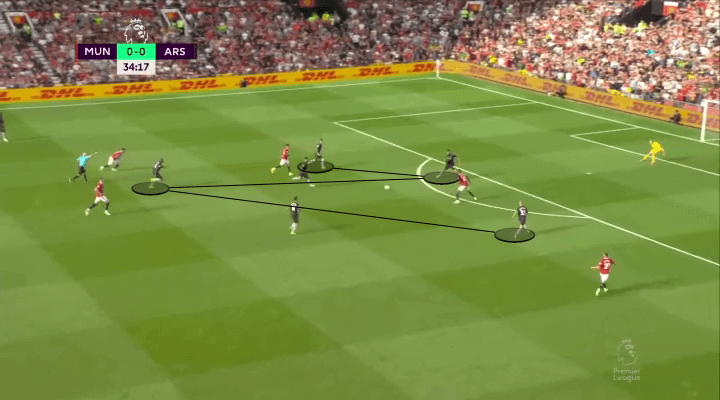 So Sancho moves the ball on to Rashford, which prompts Arsenal left-back Oleksandr Zinchenko — aware that left center-back Gabriel is out of position — to dart infield and close him down. Antony, on the far side, is already calling for the ball. 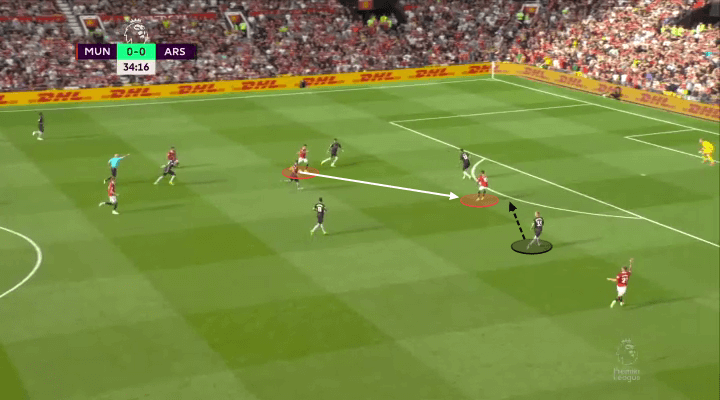 But that extra pass sucked in Zinchenko. Rashford, the 11th member of the Manchester United side to touch the ball in this sequence, plays the ball perfectly to Antony… 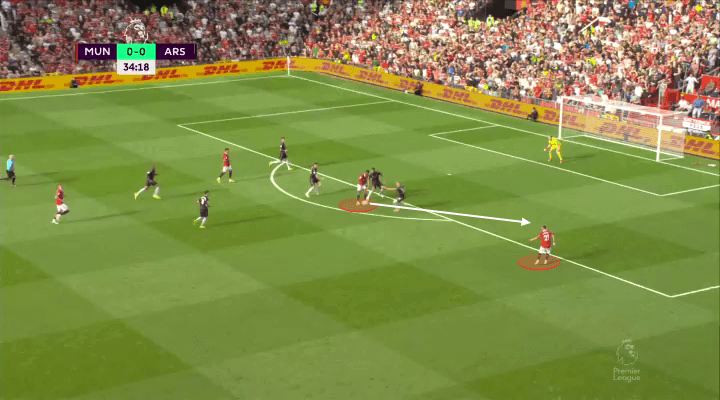 … who, 30 seconds after he previously touched the ball and played it backwards to McTominay, can apply a first-time finish past Aaron Ramsdale. 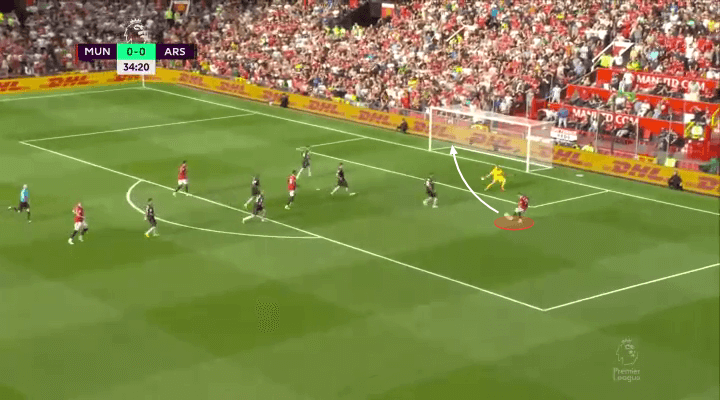 Starting from Antony’s stepovers, it went from him, to McTominay, to Varane, to Martinez, to De Gea, back to Martinez, to Malacia, to Eriksen, to Fernandes, to Sancho, to Rashford, to Antony. Only Martinez was involved more than once.

It’s an increasingly common feature of top-level football — Maurizio Sarri has based his style of play around breaking into space in possession and his sides feel more dangerous when they have the ball at the back, rather than in the opposition half. Antonio Conte’s Tottenham have also started to specialize in this type of football — when they won 3-2 at Manchester City last season, with a couple of goals scored through breaking into space in possession, he posted an Instagram video questioning why people described the goals nor “counter-attacking” goals.

Whatever you want to call those goals, this was a perfect demonstration of the value of backwards passing. Manchester United shifted Arsenal up the pitch and then played through them, then shifted Arsenal across to one flank and exploited the space created on the other. It’s difficult to imagine Manchester United scoring a goal like this in previous seasons. The Ten Hag era is definitely here.