Erik ten Hag has to settle for a 1-1 draw in Manchester United’s final friendly, with Rayo Vallecano’s Garcia equalizing after Amad Diallo opened the scoring and Cristiano Ronaldo was hooked at half-time

By Ian Whittell For The Daily Mail

Erik ten Hag failed to offer any clarity about Cristiano Ronaldo’s future after the Portuguese star played his first 45 minutes under the new Manchester United boss.

The forward, seeking to leave the club, played the first half of United’s final pre-season friendly against Rayo Vallecano, although he left Old Trafford before full time.

His replacement Amad Diallo scored in a 1-1 draw, just two minutes after his half-time introduction. 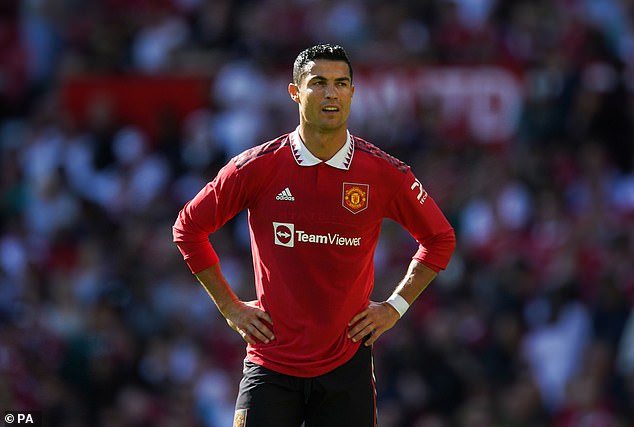 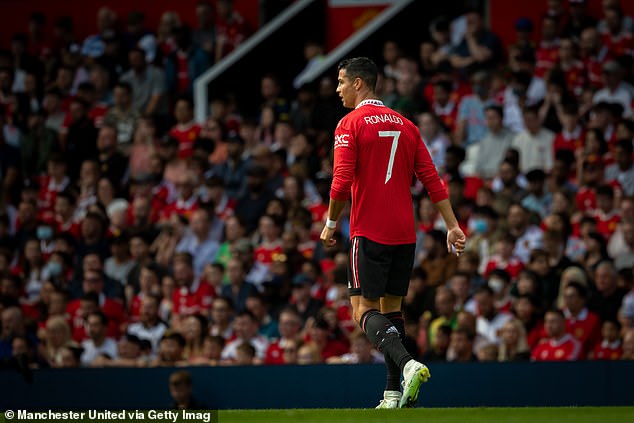 Ten Hag spoke only to United’s in-house media who, pointedly, failed to mention Ronaldo at all.

But the fans demonstrated that they are ready to forgive him, as the cheers that greeted his name all but drowned out a few boos before kick-off. Ronaldo recovered from a couple of poor early touches and looked sharp in his first action for 85 days.

He did miss United’s best chance of the first half though, blazing over after being played clear by Donny van de Beek.

He also looked exasperated when taking instructions from his coach.

Ronaldo was then seen leaving the stadium 10 minutes before the final whistle and United did not respond to questions about whether the striker did so with permission.

‘Overall, I am happy, we made a good pre-season,’ said Ten Hag. ‘We make good progress and we’re ready for the season but still there is a lot of room for improvement. 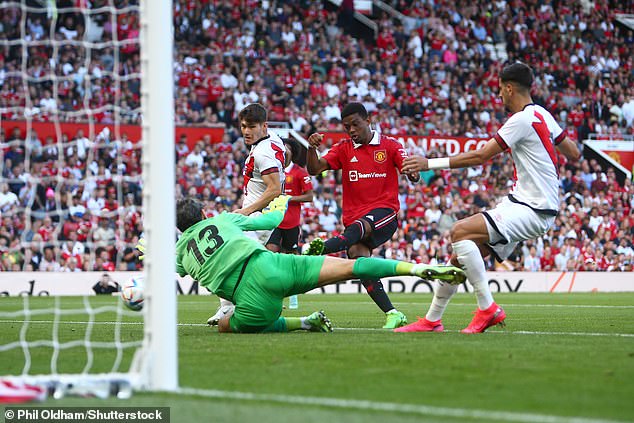 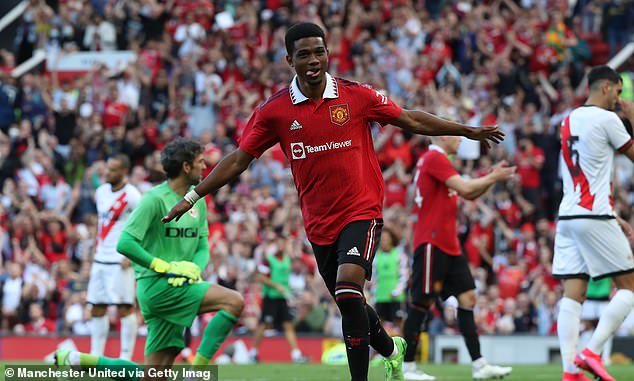 Ronaldo’s announcement on Friday that he was playing against Vallecano had led to a sharp rise in ticket sales.

And there was no shortage of ‘Ronaldo 7’ shirts and banners bearing his name on display among a crowd who were in a carnival mood.

But it took all of nine seconds for United’s second string to almost concede, with Tom Heaton forced to make a sharp save from Alvaro Garcia.

And the ‘friendly’ hardly lived up to its name on the half-hour when Vallecano fans let off a red flare and police waded in to rip down a large banner draped over the stand by Spanish supporters. 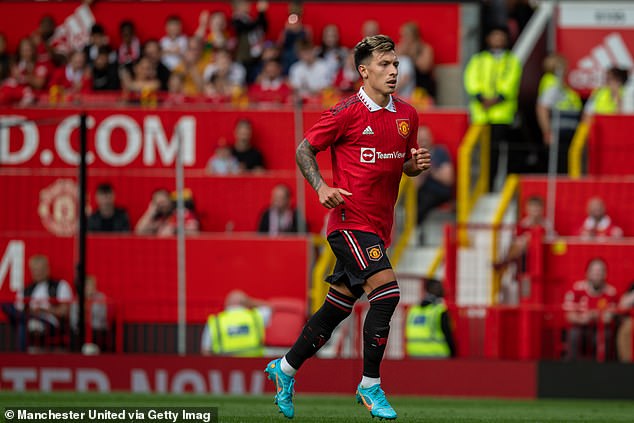 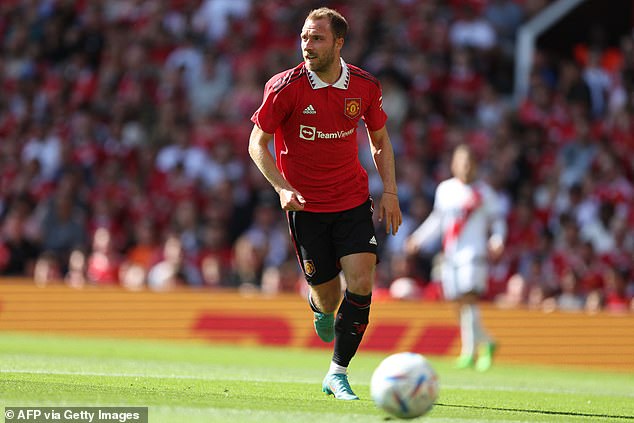 Amad finally gave fans something to really cheer about, barely two minutes after coming on, when he reacted first when Diego Lopez made a mess of dealing with an Alex Telles drive and rammed the ball into the open net.

But almost immediately, the visitors could have been level when former Red Devil Radamel Falcao hit the crossbar with a terrific effort.

On 57 minutes, the Spanish side snatched a deserved equalizer when Heaton could only get a hand to a shot from Isi Palazon and Alvaro Garcia netted from a tight angle. 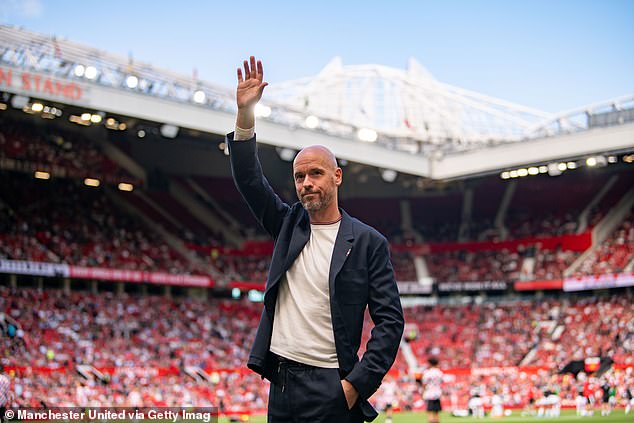 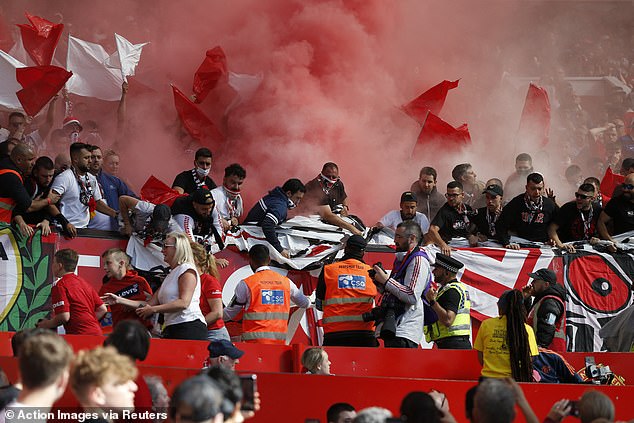 Summer signings Christian Eriksen and Lisandro Martinez were taken off after an hour, with ten Hag clearly wanting to factor them into his squad plans for the big kick-off.

But that duo appears to be the only players on duty on Sunday in with even a remote chance of starting against Brighton next weekend, with the bulk of ten Hag’s starting line-up having been on duty in Saturday’s defeat against Atletico.

Jadon Sancho, who missed the game in Oslo, was still absent through illness against Vallecano, along with Luke Shaw and Aaron Wan-Bissaka, with that trio fighting a losing battle to be match fit for the start of the campaign.