Armando Obispo’s 78th-minute header ensured Rangers were forced to settle for a 2-2 draw in the first leg of their Champions League play-off with PSV Eindhoven.

Gers boss Giovanni van Bronckhorst was in the opposition dugout to former Netherlands team-mate Ruud van Nistelrooy and it was the visitors who took the lead in the 37th minute when Ibrahim Sangare drove in following a corner.

However, Antonio Colak leveled three minutes later with a smart finish, the Croatia striker scoring for the fourth game in a row.

In front of the watching Sir Alex Ferguson, PSV goalkeeper Walter Benitez then endured a Massimo Taibi moment in the 69th minute – allowing Tom Lawrence’s speculative free-kick to squirm out of his gloves and spin behind him over the line in the Glasgow downpour.

However, PSV defender Armando Obispo headed in an equalizer with 12 minutes remaining.

Giovanni van Bronckhorst told BT Sport: “It was a very close game. The differences aren’t big [between the two sides] and we saw that tonight. We fought back well from going behind and we’re disappointed to concede a second from a set piece but the tie is open.

“We still have the chance to go through. This is the level we want to compete. Of course we can go there and win. They will be playing at home, so hopefully we can get more space. Our goal is to go there and win and we have to give everything.”

Man of the match: Ibrahim Sangare.

The return game is in the Philips Stadion next week and the pendulum may have swung towards the Dutch side but Rangers will believe they can still qualify for the Champions League for the first time since the 2010-11 season.

The atmosphere at Ibrox had helped the Gers overcome Belgian side Union Saint Gilloise in the third qualifier last month, with a 3-0 win taking the Light Blues through on a 3-2 aggregate.

Moreover, on the Gers’ thrilling run to the Europa League final last season, Red Star Belgrade, Braga and RB Leipzig were all dispatched in Govan so optimism was high amid the usual pre-match color and noise as the fans welcomed back Lawrence, Ryan Kent, James Sands and Steven Davis.

PSV had plenty of quality in their side including winger Cody Gakpo, linked with Manchester United, captain Luuk de Jong and Mexico midfielder Erick Gutierrez.

As the rain came down, de Jong almost drew first blood in the fourth minute but his volley cleared goalkeeper Jon McLaughlin’s crossbar.

Rangers’ first effort on goal came in the 22nd minute but attacker Malik Tillman’s low drive from 20 yards after he took a Davis pass was comfortably saved by Benitez.

The Gers fans sensed their team was finding some rhythm.

Minutes later, from a James Tavernier corner, there was a VAR check for a penalty after a header from Gers defender Connor Goldson seemed to hit the arm of a PSV’s Jordan Teze but play eventually continued.

The Dutch side took the lead when the Rangers defense failed to deal with a Gakpo corner from the left and defender Sangare swept the loose ball into the net from 10 yards.

However, the home side hit back quickly.

Three minutes later, Davis slid Tavernier in behind the PSV defense and he cut the ball back for Colak to steer his low drive past Benitez.

Rangers finished the first half on top with Benitez having to save a Tavernier header and early in the second half the PSV keeper made a better stop from Colak’s angled drive.

The visitors reminded Rangers of their threat moments later when Ismael Saibari poked a shot past McLaughlin but also inches past the post.

The lively attacker then flashed a shot over the bar before another effort was well held by the Ibrox keeper.

Rangers struggled to get up the pitch but in the 67th minute Tillman drove at the visitors’ defense but his shot caused Benitez little concern.

However, the keeper had a nightmare when trying to deal with Lawrence’s long-distance free-kick, the ball skidding off the greasy surface and slipping out of his hands and over the line to the disbelief and joy of the home fans.

But PSV came back again and were level when Obispo headed in a Gakpo corner.

The match threatened to go either way and in the 81st minute McLaughlin raced from his line to deny Philipp Max.

The two teams go again in Eindhoven next week and Rangers will need to dig deep to take that elusive final step into the group stages.

Colak: We head to the Netherlands with confidence

“It was a tough game and we played with an amazing support at home. We conceded twice but I feel there’s a big, big hope for the second game. We’ve shown what we can do and we have a big confidence of going through to the group stage.

“I’m happy to score and to help the team. We just need to continue like this to create the chances and I feel we can go and now complete the job in Eindhoven.

“It’s a beautiful feeling scoring goals for this club and I just want to continue the hard work. It’s 2-2 so everything is possible. It’s a good result for next week and our target is to go through.

“We are going to win every game and the coach will prepare us very well.” 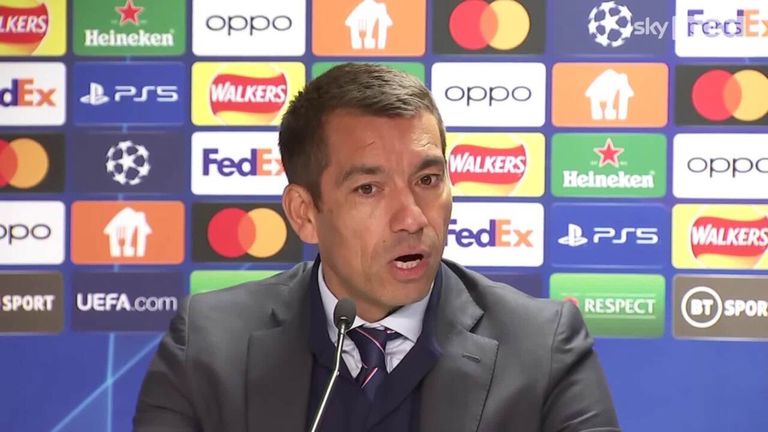 Rangers manager Giovanni van Bronckhorst admits his side were affected by nerves in the opening stages of their 2-2 draw against PSV, but remains confident they can progress to the Champions League group stages.

Van Nistelrooy: Both teams so balanced 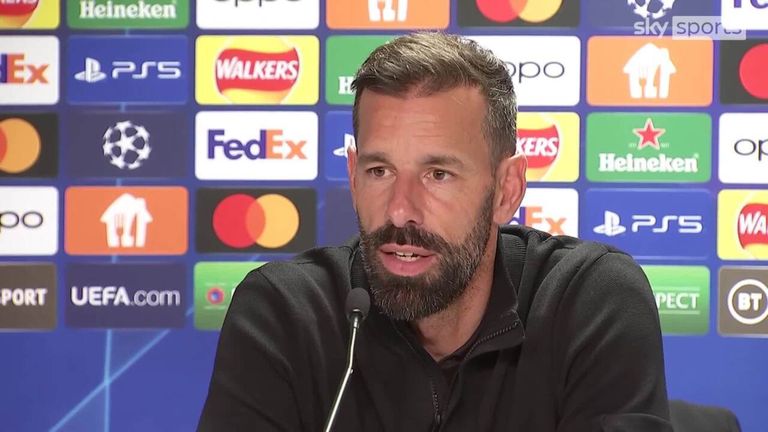 PSV boss Ruud van Nistelrooy hailed the impact of the Ibrox crowd in their 2-2 Champions League draw with Rangers.

Ruud van Nistelrooy, who took over PSV in the summer, was happy to meet up again with his former Manchester United manager – Sir Alex Ferguson was in the Ibrox stand to watch his former side.

The 46-year-old said: “I was proud that he watched. I’m glad he’s well. I spoke to him just briefly but he’s well and looking great. His family is well.

“It was great to see him. For him to see me on the touchline at Ibrox is a proud moment for me.

“I learned so much from him. When you develop yourself as a coach, you obviously look back at the managers you had, what they did, how they formed a team, the style of play and how they managed individuals. He is such an example in that sense.”

Looking forward to the return game in front of his own fans, the former Netherlands team-mate of van Bronckhorst added: “Next week we have that support but both teams are very level with playing styles so it is reduced to one game, a final at home.

“So we have to prepare and be at our best to get a good game against Rangers.

“I thought it was a game with two halves, Rangers were on top in the first half, although of course we had the goal. We were on top in the second half and created more chances. 2-2 was a fair result and now it is reduced to one game.”

Rangers visit Hibernian on Saturday at 12.30pm, live on Sky Sports, in the Scottish Premiership; coverage starts at 12pm. The second leg of the Champions League play-off takes place in Eindhoven at 8pm next Wednesday.