Union Berlin have more than 40,000 members — more than local rivals Hertha BSC, but who’s counting? — and on Saturday, they could have signed up another two, at least.

Both the visiting coach and their record outfield player (633 competitive games) professed themselves huge admirers of the “Irons” from the east side of the capital after a thoroughly entertaining encounter at Alte Forsterei. Julian Nagelsmann praised Union’s “cool stadium, cool crowd, cool club, cool Urs (Fischer, the manager)”, while Thomas Muller noted that Fischer’s men had “delivered exactly the kind of stuff that makes them so good and has won them much respect throughout the league — including from me. I’m a fan of Union.”

Winners handing out nice compliments to their opponents often carries a whiff of condescension. But here, Bayern weren’t the winners and the sentiment appeared genuine. The whole of Union, on and off the pitch, had worked hard for the plaudits, and they deserved them after battling to a 1-1 draw that will go down as one of the season’s most engaging ding-dongs. “We haven’t faced a stronger side all season,” Manuel Neuer said, a little begrudgingly.

If going into the match level on points with the past, future and eternal Bundesliga champions was testament to Union’s remarkably good start to the season, the 90 minutes in front of 22,000 delirious supporters showed that their flight of fancy is anything but a happy coincidence. Union were at their gritty, aggressive best in the Saturday afternoon sunshine, chipping away at Bayern’s combination play in midfield, contesting every ball, and then going mostly long and direct, with power and precision.

But for all their energy and fierce tackles, Fischer’s intelligent coaching always shines through. Their opener, a training-ground set-piece cross smashed home with a nonchalant volley by Sheraldo Becker, perfectly illustrated the design behind the orchestrated mayhem. “It was tough work, but the match plan worked out again,” wing-back Christopher Trimmel said.

Fischer, the middle-aged Swiss fishing enthusiast at the heart of the club’s irresistible rise from Bundesliga 2 to the Europa League in four years, wasn’t even particularly enthusiastic about winning a point against the Bundesliga’s hegemonic power. “The team played a great game and deserved the draw,” he said, as if talking about a hum-drum 1-1 against VfL Bochum. “We never became passive, we always tried to put pressure on the ball. The lines worked really well together.” 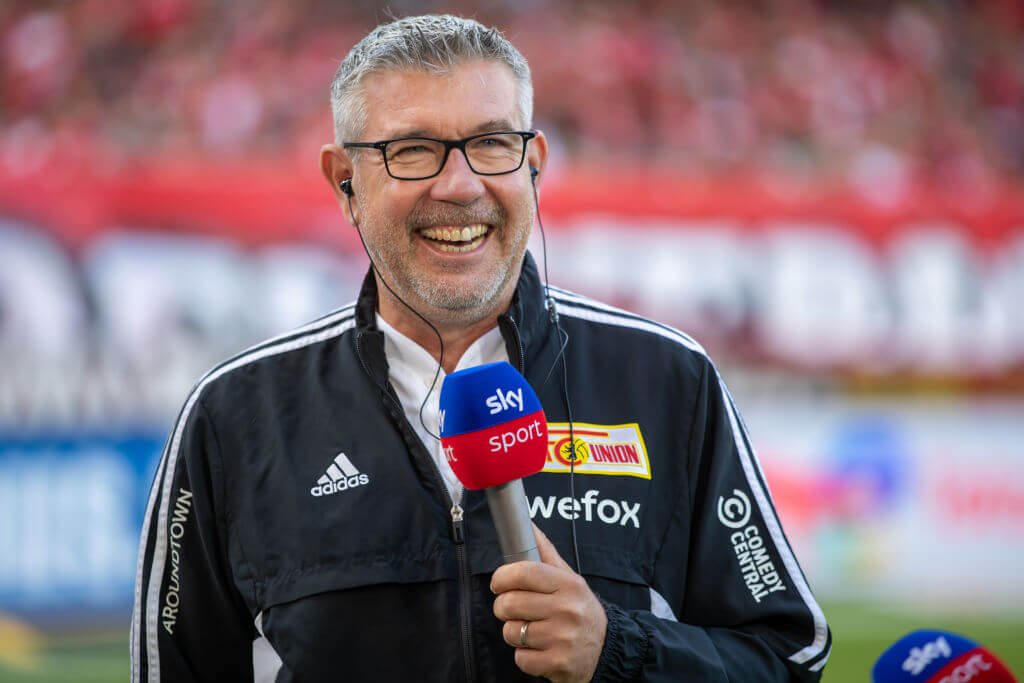 That’s the secret, really: the different parts of the club come together really well at Union. There’s Fisher, a superb manager who cleverly hides his brilliance behind the blandest of public personas. There’s sporting director Oliver Ruhnert, an impressive operator, who sells top players such as Max Kruse (VfL Wolfsburg), Robert Andrich (Bayer Leverkusen), Marvin Friedrich (Borussia Monchengladbach), Grischa Promel (TSG Hoffenheim) and Taiwo Awoniyi (Nottingham Forest) for top dollar and replaces them with unknowns who soon become top players under Fischer’s guidance. There’s Dirk Zingler, the president who cultivates the club’s self-styled otherness with the odd reactionary statement about COVID-19 and vegan sausages but has also masterminded an unprecedented economic boom. Union are on course to turn over €100 million (£86.5 million, $99.5 million) for the first time this season, money that will be used to extend the stadium and rebuild the train ground.

The club’s miraculous ascent has created a clamor for tickets as well as some tension between die-hards and newer converts, but the high number of lifelong fans working for the club has safeguarded against a loss of identity. On Thursday, the club will host their first Europa League game. They could have also played in the 75,000-seater Olympic stadium for more money, but there was never much doubt that they would stay at Alte Forsterei, a homely, no-frills stadium partially built by their own supporters.

“For us, it’s about the people in the ground,” stadium announcer and press officer Christian Arbeit told Kit Holden in “Scheisse!”, a wonderful book on the soul of Union. “It’s about the people who are physically here, the people who sing the songs here, who drink beer and watch football here.” No other Bundesliga side, with the possible exception of new league leaders (!) SC Freiburg (3-2 winners at Bayer 04 Leverkusen) have such an unadulterated connection with their supporters.

Nor for Bayern, they came away licking their wounds and looking for answers. A draw doesn’t feel much different to a defeat in Munich; two consecutive draws feels worse. “We lacked precision in the final third,” said Marcel Sabitzer about his team’s mostly futile efforts to find a way past Union’s defensive might. Once again, the finishing could have been better, but unlike last week’s freakish 1-1 with Borussia Monchengladbach, Bayern didn’t nearly create enough. There wasn’t enough energy, not enough conviction, no clarity, no… Robert Lewandowski? The Polish centre-forward may not have left much of a mark on the supporters’ collective psyche, but every poor result this season will see his invisible presence grow.

Nagelsmann was quite unnerved when someone asked him if things might have turned out differently in Berlin with Lewandowski in the box. “It’s only a question because you (journalists) keep asking it,” the 35-year-old said. The last thing he needs before two big Champions League games against Inter and Barcelona in the next 10 days is doubt about Bayern’s forward line.

Elsewhere, there was a huge 4-0 win for Eintracht Frankfurt over worrisome RB Leipzig, with Mario Gotze and new forward Randal Kolo Muani looking particularly good for the home side. “We were beyond the pale, a catastrophe,” RB coach Domenico Tedesco said. In Wolfsburg, Niko Kovac racked up another home defeat (4-2 at home to 1. FC Koln) to edge closer to the exit, whereas Borussia Dortmund’s Edin Terzic masterminded a 1-0 win over TSG Hoffenheim. The Signal Iduna Park floodlights helped to banish the fear of another poor result against their bogey team — Dortmund hadn’t lost a match at home on Friday night since 2004 and were fully aware of that fine record before kick-off.

Unfortunately, celebrations after a second consecutive clean sheet were a little muted by injury to Jamie-Bynoe Gittens. The 18-year-old dislocated his shoulder and is unlikely to feature in the coming weeks. Shame.